A tattoo is both a symbolic and decorative pattern. It is a way to externalize certain aspects of our personality such as a character trait or a feeling hidden deep inside us.

Each tattoo is different. Many of them are composed of an animal, because they have a strong meaning. Whether it is a lion, an eagle or a snake, they are more and more in demand among tattoo artists.

In this article, we will interpret the meanings of snake tattoos. This totem animal has strong symbolism since the dawn of time in many civilizations, with interpretations that vary depending on how it is drawn. 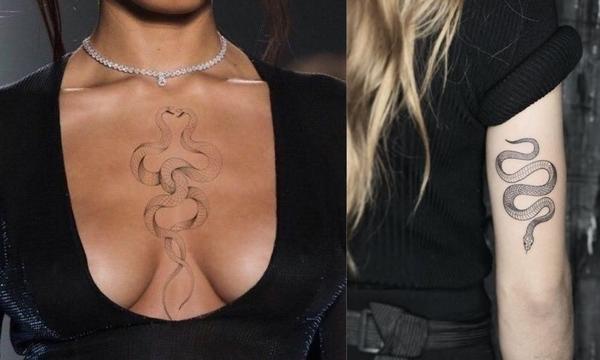 What Does A Snake Tattoo Mean ?

The snake is often associated with another element in a tattoo, such as a flower, a skull or a dagger. The meaning that can be drawn from the design does not depend only on the snake itself, but also on the elements that make up the tattoo. 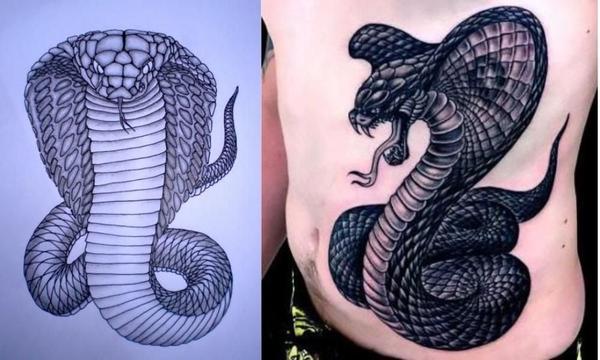 The King Cobra is a very symbolic animal in some countries, especially in India where it is the sacred emblem of divinity. This reptile is one of the most famous in the world, especially thanks to the snake charmers who use it to perform.

According to a legend, the snake charmers have a tattoo of King Cobra made with inks that contain its venom to protect themselves from its attacks.

Therefore, the Cobra tattoo symbolizes protection and healing. It is also a symbol of wealth, nobility and social status. 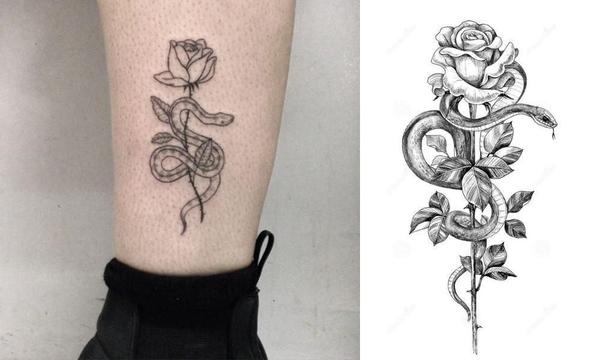 The association between the snake and a flower is very common on a tattoo, the most popular flower being the rose. The tattoo of a snake with a flower is the ultimate symbol of temptation. But, it can also symbolize the loss of beauty and innocence.

Depending on the colors of the tattoo can also have different interpretations. The red rose is the symbol of love and affection. Therefore, its association with a black snake means charm towards a woman, tenderness or loving affection towards a person.

This type of tattoo is very popular and is one of the most popular. The contrast between the colorful flower and the dark snake brings a certain degree of realism. Moreover, the symbolism of this tattoo is very strong and convincing. Indeed, getting a tattoo of a snake wrapped around a rose is a good way to show your affection or love for a person. 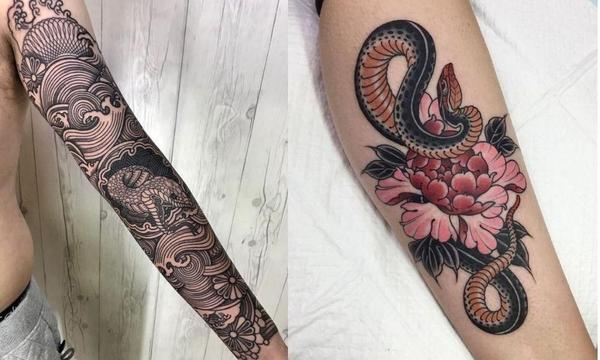 In traditional Japanese culture, the snake has a negative connotation. It symbolizes illness, disaster or bad luck. Getting a snake tattoo is considered a totem that allows them to protect themselves against the negative representations it embodies. In some cases, it also means protection against bad results or bad decisions.

A Japanese tattoo can also symbolize wisdom, change, strength and change. It can also be interpreted as a sign of good health and good will.

The Japanese tattoo therefore has many positive meanings in their culture, these usually revolving around health, success and behavior. 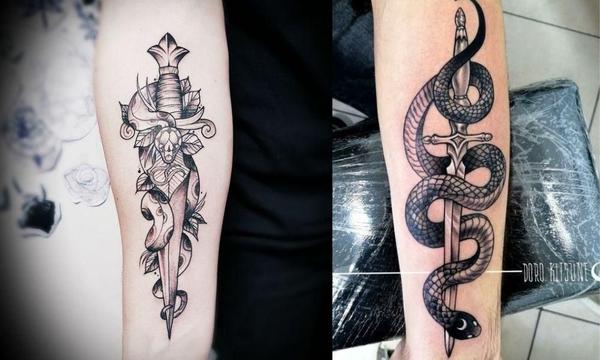 The snake wrapped around a dagger or staff refers to the Caduceus, the attribute of the Greek God of Medicine, Asclepius. Therefore, this design is closely related to fertility and rebirth.

For more information, you can read our article on the Snake Medical Symbol

Moreover, this motif symbolizes transformation and renewal. In other words, the person who gets this tattoo undergoes a transformation or a renewal in his or her life following a fight he or she has led. Most of the time, this renewal is often positive, representing a better version of oneself.

At the time, those who were not tattooed often wore a snake ornament, like this magnificent caduceus necklace.

The eagle is a bird reserved for noble people with impeccable morals. The snake represents sexual passion and temptation.

The combination of these two animals for a tattoo symbolizes the struggle between a person’s honorable intentions and their vindictive and wild nature. They can also represent the struggle a person is experiencing, such as a war between the Devil and God. So the Eagle represents good and the snake represents evil. 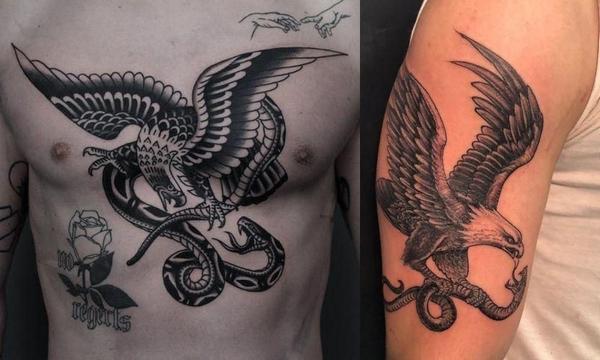 Depending on the tattoo, the eagle may be more or less prominent in relation to the snake, representing the war between good and evil, the conflict between God and the Devil, or the disputes between sexual passion and temptation versus nobility and honor. 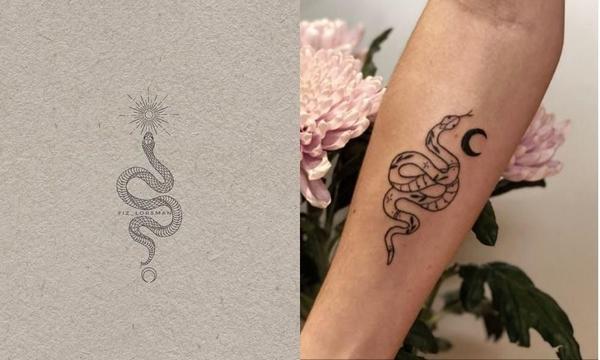 This tattoo design is particularly present in the gothic counterculture. It represents the association between the snake and the night.

The tattoo of a snake and a moon puts forward the opposition of two elements. It represents the character of a person who does everything against the grain, who does not agree with the typical pattern of a normal day for most people. By this drawing, the tattooed person wants to show his difference, the contradiction with the normality. 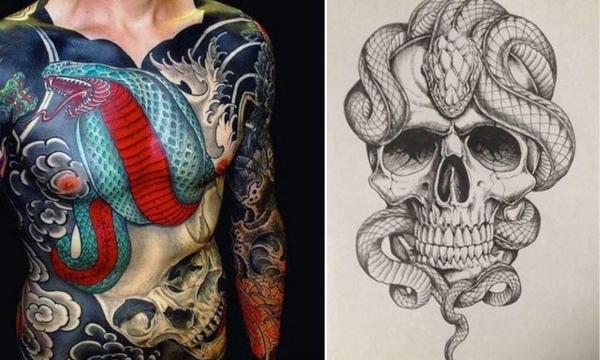 The skull represents death and decay. The snake can also be interpreted as a symbol of death, especially with its deadly venom. The association of the two in a tattoo is to put forward that one does not fear death. In other words, people who tattoo this design tend to play with their lives without being afraid of the consequences.

Bring out the dark side of your soul by wearing this skull snake ring.

On the other hand, the snake embodies a powerful force of nature representing the primal instincts and desires of man, but also an obstacle to spirituality. The tattoo of a skull and snake is even more popular in art because it represents a reminder of mortality to man.

This tattoo is therefore an interpretation of man’s life, reminding him that it is inevitable and that it always has an end.

In some cultures, the snake is also the symbol of healing and rebirth. Therefore, linking this animal to the skull represents the cycle of rebirth. 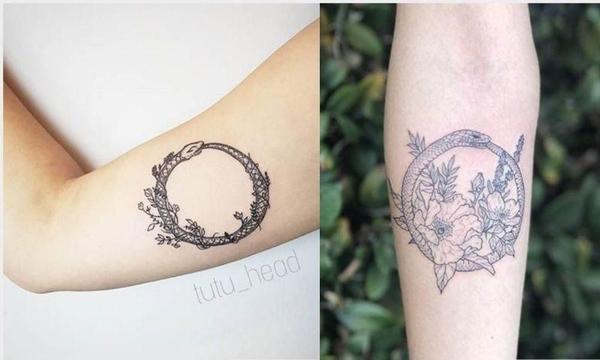 The body of the snake can take on just about any aspect. Therefore, it shows that the outward appearance is often deceiving. Underneath its innocent and calm appearance, the snake is able to surprise and attack very quickly.

When the pattern represents a snake biting its tail, called Ouroboros, it symbolizes the cycle of life and immortality. The infinite form of this pattern shows that life in the universe is a vicious circle that never ends. It represents the eternal aspect of the universe. 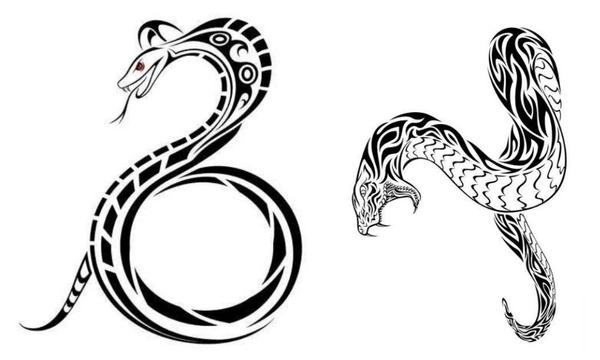 Tribes are indigenous societies that have not opened up to the outside world and have remained within their traditions. As a result, they represent their cultures and histories through their own unique designs. These motifs represent mostly elements of nature and the spiritual world. Among these is the snake, one of the oldest religious symbols in human history.

In some cultures, the snake is linked to nature deities. This is why many people get a tribal tattoo, because it represents the strong connection with an indigenous heritage, with natural events or with the spirituality of the person getting the tattoo. The person who tattoos one of these designs is often trying to express their thoughts with the outside world or to show the importance of their tribe to them.

The lion is a very impressive animal that can make anyone who sees it or hears its roar. It is a masculine symbol that embodies power and primary strength (just like the dragon). It is not for nothing that this animal is considered the king of the jungle in the symbolic universe of many cultures.

On the other hand, the snake is considered the thinker of nature. When these two animals are combined in a tattoo, they represent the personification between the rational and animal side of the person.

In other words, the snake and lion tattoo symbolizes both the power and strength of the lion and the knowledge of the snake. The lion embodies the animal side of the wearer while the snake embodies his rational side.

The combination of these attributes defines the male character of the person. The wearer of the tattoo needs power and strength to lead his life but also knowledge to make the right decisions at the right time. 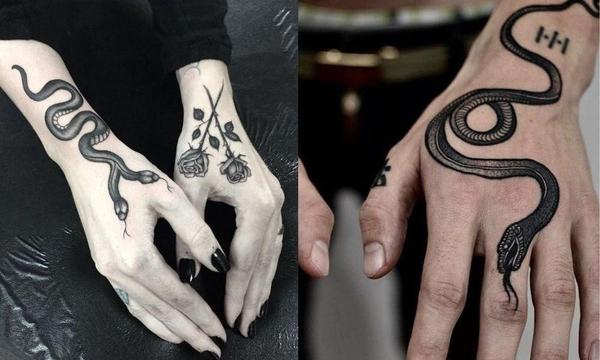 The combination of a hand and the snake has been very popular since the 1800s. It symbolizes loyalty, inner peace and friendship. Overall, the snake tied to the hand is a sign of solidarity.

Some variations of this tattoo design exist, like the snake handshake design. This ironic representation represents the perfect opposite of the symbolism seen above. It shows that trust is difficult to grant and that every person around us can turn out to be a traitor. This tattoo inspires distrust and betrayal.

Snake Tattoo Meaning On a Woman 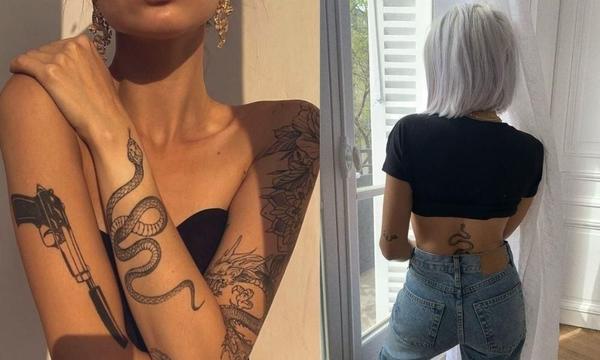 Since the dawn of time, the snake is linked to the woman. Indeed, it is this animal that tempted Eve to consume the fruit of the forbidden tree in Genesis. It is this temptation brought by the snake that created the beginning of the descent of the Human.

Referring to this story, the tattoo of a snake on a woman symbolizes fertility.

To bring an additional touch of femininity, the tattoo of a snake is often smaller and associated with a rose and a woman.

Therefore, it often refers to life, love and giving birth. Generally speaking, it is therefore a rather positive sign in a woman.

Snake Tattoo Meaning On a Man 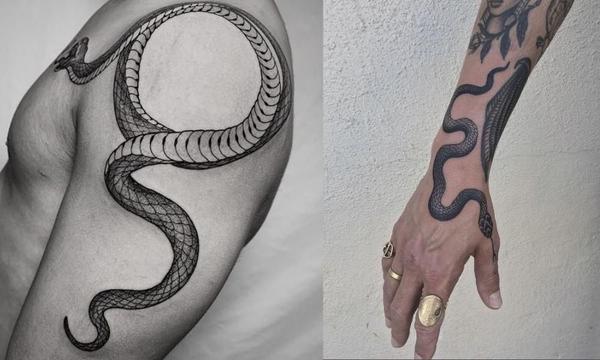 Contrary to the snake tattoo which is rather positive in women, it is rather linked to the negative in men.

A man who gets a snake tattoo often seeks to show his power, his fight and to ensure his ability to protect his loved ones.

In Greco-Roman ideologies, the snake is considered as the protector of the underworld but also of many mysteries that man tries to understand. These two interpretations explain the choice of a man to get a tattoo of this reptile.

The snake is a very unpredictable animal. A tattoo with its effigy symbolizes quite amazing values. It represents both healing and purification.

In some civilizations, it also evokes change, a transition in one’s life, or even a total personal renewal.

Both men and women choose many different parts of the body for a snake tattoo, whether on the arm, ankle, thigh, chest …

Snake Tattoos have many deep meanings that allow you to externalize some aspects of your personality.

If you like the symbol of the snake, you should read our article on the meaning of the snake dream.

Otherwise, if like us, you are passionate about this fascinating reptile, you should go have a look at our online store. SNAKE DREAM™ is the first brand entirely inspired by the snake. Through our handcrafted products, we have tried to transcribe our passion for this mythical animal.