With its scientific name Crotalus Atrox, the Western Diamondback Rattlensake is much talked about in the United States. This highly venomous snake is the cause of many bites in the country. This species of the Cortalinae family is very easily recognizable thanks to the characteristic rattlesnake at the end of its tail. In this article, we propose you to discover one of the most dangerous snakes of the Southeast of the United States.

The Western Diamondback’s flat head is thicker than its body, making it easy to distinguish from its neck. The central part of its body is made up of 21 to 29 rows of diamond-shaped scales, which is how it got its name.

Its main color is yellowish gray, greenish, reddish, even black for some specimens. A column of dark spots in the shape of a rhomboid crosses its back.

Its fangs contain a hemotoxic venom that produces swelling and necrosis, which can lead to death in the hours following the bite. As in other species, the Western Diamondback Snake has “spare” fangs that can replace those broken or damaged.

Finally, we find the most famous characteristic of this reptile, namely the rattle on the tip of its tail. During each shedding, which occurs two to three times a year, this snake adds an extra rattle with the remains of keratin from its dead skin. When it wags its tail, it emits a sound that is a kind of warning signal before going on the attack.

This snake is well known for having caused many deaths in humans due to its bites. This species is one of the most aggressive in the United States.

Unlike many of its fellow snakes that run away from a fight if they feel threatened, the Western Diamondback Rattlesnake often attacks its enemy. When it feels in danger, it crouches down and lets out its rattle. If the sound it makes is not enough to ward off the threat, it attacks without hesitation.

The size of the Western Diamondback Rattlesnake can reach 8ft (2.5m) for the largest specimens, although the average is 6.5ft (2m). This length makes it one of the largest snakes in the United States.

It is a thick and heavy animal, with males often slightly larger than females. The average weight of this species is 33lbs (15kg). 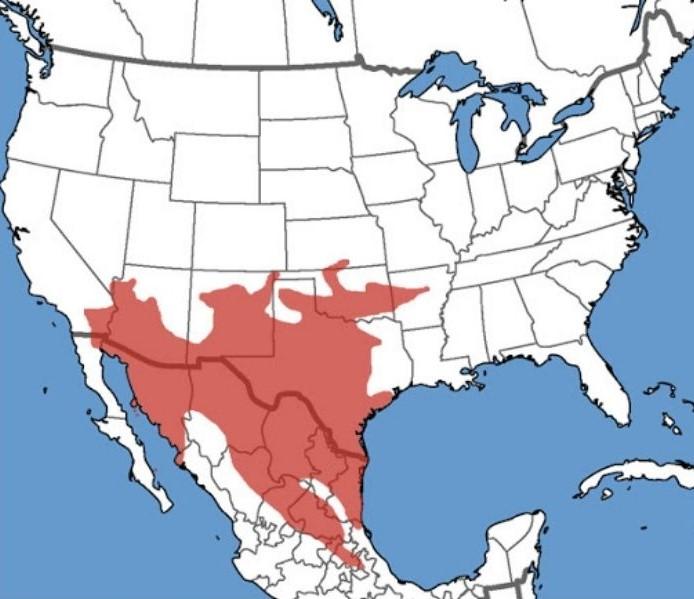 This snake is found in Mexico, (Sinaloa, Veracruz, Querétaro, Hidalgo and Baja California), as well as in the southeastern United States (New Mexico, Texas, Arizona, Nevada, Oklahoma and California). It likes to live in the desert, but also on lonely plains, rocky slopes, empty brush and in some forests.

The diet of this reptile consists of rodents (mice, squirrels …), small mammals, birds and other reptiles. It is a nocturnal species, which means that it hunts at night and rests during the day. The predator it fears the most are Humans, that’s why it can be very aggressive towards him.

Its hunting technique is based on night stalking. To detect its preys, it uses its thermoreceptors located between its eyes and its nostrils. Once he has spotted a prey, he positions himself on its path and waits peacefully until it arrives at Its height to attack it. It then injects its venom into the body of its prey and then moves away from it, while its poison takes effect.

After eating, and depending on the size of the prey, the Western Diamondback snake can stay several weeks without eating.

This oviparous species mates during the fall. The gestation period lasts about 6 to 7 months. Depending on the size of the female, she can lay between 4 and 25 eggs. The reproduction period occurs only every 2 years in this species.

At birth, the baby Western Diamondback Rattlesnake measures about 1ft (30cm). Its rattle measures 10.3in (27cm) and has more pronounced colors than the adults. The little ones become autonomous very quickly. Indeed, after a few hours spent with their mother, the babies leave alone in the wild, which leads to a large number of deaths in the young. The juveniles take between 3 to 4 years before reaching sexual maturity.

Positive and negative points of the Western Diamondback Rattlesnake for humans

Despite its dangerousness, this snake is still useful for humans, especially because it regulates the number of rodents. This species can be kept in captivity, making it a good educational resource for zoos and snake shows.

Moreover, the rattle of this reptile is rooted in the Amerindian culture. Indeed, its venom, its oil and its meat have long been used as a source of food and as a base for medicinal preparations. Its skin is also used to make shoes and belts.

This snake has also created a great deal of paranoia among humans due to its numerous deadly bites. Numerous “protections” have been installed against the Western Diamondback, such as poisons, traps or the destruction of shelter and food in their natural environment. Despite this, this very successful and fertile species is in no way threatened with extinction.

The venom of this snake is extremely dangerous for humans. It is composed of 53% hemotoxic substances, i.e. chemical substances designed to affect blood vessels, the heart and blood cells. It also contains hemorrhagic properties that destroy cells, muscle tissue, and contribute to the failure of the cardiovascular system.

After a bite from a Western Diamondback Rattlesnake, local effects occur such as pain, intense internal bleeding, muscle damage, bruising, swelling and blistering. Other effects may include headaches, vomiting, nausea, diarrhea, convulsions, dizziness or abdominal pain.

Threats of the Western Diamondback Rattlesnake

With a wide range and a species with over 100,000 adults, this snake is far from threatened. However, destruction of their natural habitat and hunting can become potential threats. Hunting operations known as “Rattlesnake Roundups” are carried out in some states to reduce the number of Rattlesnakes. These methods have been widely criticized because in addition to destroying the environment and affecting other unaffected animals, they eliminate an important predator for rodent control.

Whether you live near where this snake lives or are vacationing in the southeastern United States, always learn about the snake species in your area.

While you still want to avoid snake bites, it is important to know how to identify the species so you can better understand the differences in treatment levels.

If you are going on a hike, avoid areas of brush. Always try to stay near trails or open areas where you have good visibility. If you must walk through tall grass, carry a stick to scan the area before you venture out. Snakes often use tall grass to hide or hunt their prey. Plus, their natural cover makes them even more invisible to the naked eye.

Also, look above you as you move, as some species of snakes are arboreal and therefore like to spend time in trees.

Finally, avoid sticking your feet into crevices or holes. Snakes like to huddle in dark places to hide.

In summary, look around when you go for a walk. Snakes can be anywhere !

Although the Western Diamond Rattlesnake is a real threat to humans, it is still essential to regulate the number of rodents. This very aggressive species does not like to be disturbed. So, a piece of advice, never wait for him to shake its rattle before running away because it could already be too late!

If you liked this article, you should subscribe to our newsletter to receive all our next articles in preview, as well as other exclusivities.

If you are passionate about snakes, we have made a large selection of Jewelry, clothing and accessories featuring this mythical animal. We therefore advise you to check out our brand, Snake Dream™, the first brand entirely inspired by the snake.